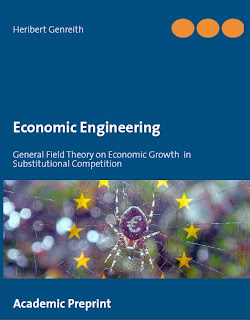 I have made an English translation of the German book „Makroökonomische Feldtheorie“ for the international reader. It comes also with some advances, especially to the General Field Theory part of it. The working title is „Economic Engineering: General Field Theory on Economic Growth in Substitutional Competition.“ (Books on Demand, Paperback, 192 Pages). The title reflects the fact, that theoretical macro-economy, and especially its practical use, in future macroeconomy will be an engineering like distinct and exact task.

Foreword to the Preprint Version:

The German edition of this book was published in 2011 with the title“Makroökonomische Feldtheorie: Allgemeine Theorie des ökonomischen Wachstums in Substitutionskonkurrenz”, ISBN 978-3-8423-8029-5, BoD, Norderstedt, 2011. The most simplest linearized model was first introduced in literature a little bit earlier in Peetz/Genreith, “Neues Makromodell: Die Grenzen des Wachstums: Finanz- vs. Realwirtschaft,” Die Bank, 3/2011, S. 20-24. An English translation of this article appeared in Peetz/Genreith, “The financial sector and the real economy”, Real-World Economics Review, issue no. 57, 6 September 2011, pp. 40-47.

Im still working on an approved edition of this fundamental economic book in English language. Producing high quality academic books with layout standards and correct translated language like it is requested by the eminent international academic publishing companies is a very time and cost intensive task. Time that we don't have due to the actualities. Due to the dramatically increasing financial crisis, not just in the EU, but also in the US and mainly most developed countries, I have to publish this somehow raw preprint. Although the maths is on actually high standard, the graphics and the language are not yet finished to standard academic book quality. Especially the graphs have to be redesigned. Although the graphs are partly still with German markers, they are mostly self-explanatory and also provided with detailed english descriptions.

The book's preprint is published to enable international university scientist, which are no German language readers, to use and cite the new theory much earlier. I hope the worldwide much larger community of economists reading english literature will pardon me for my sometimes fragile English. The final (ISBN listet) edition will appear after a lot of fine tuning in later 2012 or 2013. The preprint version can beoffered﻿ meanwhile for a much reducedprice of just 17,90 €.

You may order the academic preprint book via BoD or if you like by email directly from me, especially if you need reduced prices for ten books or more. 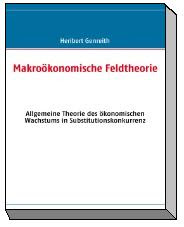 Es ist nun eine Wiki zum Thema eingerichtet -- It is now a wiki set up on the topic:

Economics of Growth and Crisis 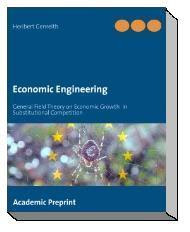 Read the exact Maths behind it. Free Web-text available.